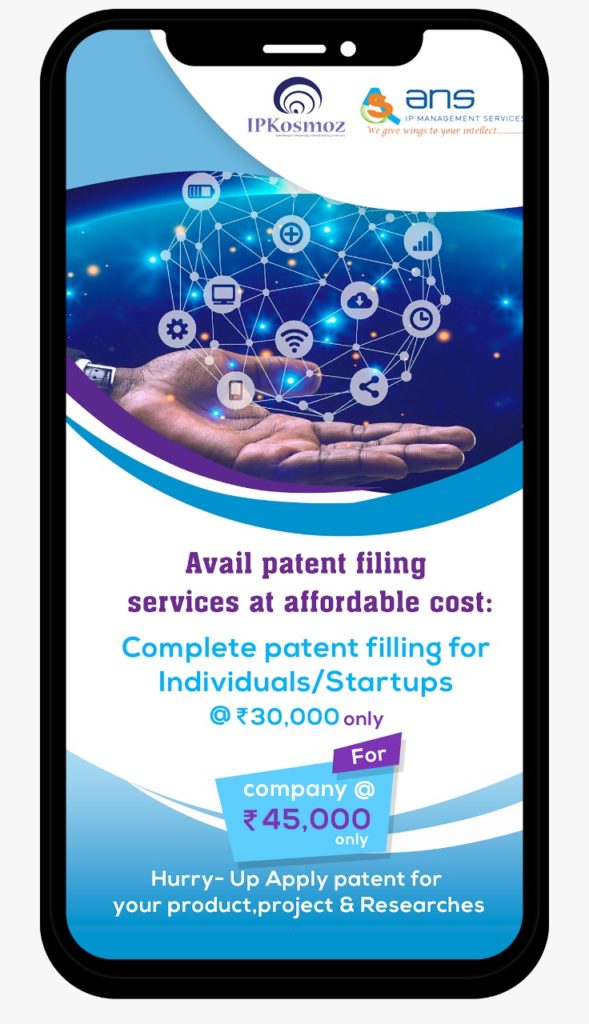 A patent is a set of exclusive rights granted by a sovereign state to an inventor or assignee for a limited period of time in exchange for detailed public disclosure of an invention.

Patent is a part of Intellectual property rights and guided by Indian Patent Act, 1970 (till 2014 amendment). A procedure to file a patent in India is below mentioned:

An individual, a company including a start-up, a SME or a large entity and an education institution is eligible to file a patent directly for their inventions in the patent office if the invention is novel in nature, involves inventive step and has industrial application. A direct patent application of the patent is achieved through one of the below mentioned steps:

What is the Patent Registration and Patent Filing Cost in India?

Submit the forms, patent draft and a cheque or demand draft of an amount guided by Indian patent office. For example – for patent filing – individual/group of individuals/startups can pay ₹ 1,750; SME can pay ₹ 4,400; a large entity can pay ₹ 8,800. A detailed fee structure can be accessed from below link:

If an inventor or applicant is holding a class 3 signature, he/she can file a patent through online portal of http://ipindia.nic.in/.

For Example – if your invention is in the field of solar technology, then go to http://ipindia.nic.in/e-gateways.htm#public-search, select “Patent” under public search option and enter keyword “solar” in the title or abstract field.

You will get a list of published patents, select few of them and try to see the uploaded specification in each of the selected result. Match the specification format with the format suggested in Section 9 of the India patent act. Choose only those results which matches the format and read them, choose the patent whose content is easy to read and drafted in suitable manner as per you and that’s the template you can follow to draft the patent and file it in Indian patent office.

File a Patent Application Through a Patent Lawyer/Patent Attorney:

For getting best results out of their patent application, the applicant must take assistance of a patent attorney/patent lawyer having good experience. The patent lawyer’s charges are higher than self-filing but it removes most of the hurdles and silly errors followed during direct filing of the Indian patent application by an applicant.

The attorney also should guide the inventor to follow below mentioned procedure for his or her patent filing:

Section 3 and Section 4 (Atomic based researches) of the Indian patent act-1970 provides guidelines of which technical subject matters are not patentable on technical grounds. Hence, any invention which falls under the clauses mentioned in Section 3 should be filed as a patent in India. The clauses of Section 3 are:

(a) an invention which is frivolous or which claims anything obviously contrary to well established natural laws;

(b) an invention the primary or intended use or commercial exploitation of which could be contrary to public order or morality or which causes serious prejudice to human, animal or plant life or health or to the environment;

(c)    the mere discovery of a scientific principle or the formulation of an abstract theory or discovery of any living thing or non-living substance occurring in nature;

(e) a substance obtained by a mere admixture resulting only in the aggregation of the properties of the components thereof or a process for producing such substance;

(f)  the mere arrangement or re-arrangement or duplication of known devices each functioning independently of one another in a known way;

(h)  a method of agriculture or horticulture;

(j) plants and animals in whole or any part thereof other than micro­ organisms but including seeds, varieties and species and essentially biological processes for production or propagation of plants and animals;

(k)   a mathematical or business method or a computer programme per se or algorithms;

(l)   a literary, dramatic, musical or artistic work or any other aesthetic creation whatsoever including cinematographic works and television productions;

(n)   a presentation of information;

(p)   an invention which in effect, is traditional knowledge or which is an aggregation or duplication of known properties of traditionally known component or components.

For Full Details Over Non-Patentable Matter Please Go To Link –

STAGES OF PATENT REGISTRATION IN INDIA

The inventor can also chose to publish the patent application earlier than the stipulated time of 18 months by filing Form 9 in the Indian patent office.

After getting grant for the patent application in India, an inventor has to file a patent annuities every year and pay prescribed fee to keep their patent sustained in the Indian patent office.