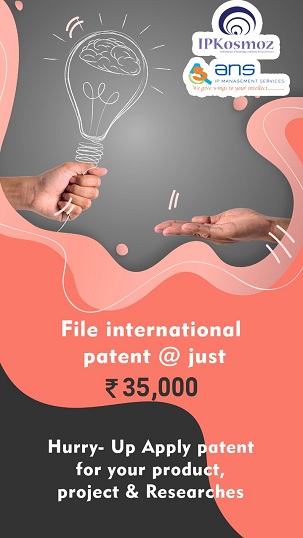 A single filing of a PCT application is made with a Receiving Office (RO) in one language. It then results in a search performed by an International Searching Authority (ISA), accompanied by a written opinion regarding the patentability of the invention, which is the subject of the application. It is optionally followed by a preliminary examination, performed by an International Preliminary Examining Authority (IPEA). Finally, the relevant national or regional authorities administer matters related to the examination of application (if provided by national law) and issuance of patent.

The International (PCT) application is by nature a temporary placeholder. It serves as a delay mechanism to buy more time before entering the national stage of each desired member country. In that respect, a PCT application is similar to an option contract in the financial world.

The International Patent application provides an additional period of 18-19 months to an invention in comparison to a conventional national phase entry for filing the patent in different country other than native country. The additional 18-19 months may be crucial for you to raise capital or monetize your invention. You may even decide that the invention is not worthy of protection in so many foreign countries, in which case you would have only spent a few thousand dollars to gain the extra time to come to this conclusion. Without the PCT application, you would be forced to decide to spend tens of thousands of dollars at the 12-month deadline only to realize later that it was not worth it.

ANS IP Management Services team is highly experienced in drafting and filing international patent filing at competitive rates. In addition to this, our team leads from front to communicate to PCT office against the search report and written option generated by WIPO.

Why Should You Choose for International Patent Filing?

As we all know that a patent is a jurisdictional right and you get the priority rights and enforcement rights in a country where it is registered. The real issues begin if an innovation has an international potential i.e. the product or patent has similar or more market value in a country other than the native country of the inventor. So, what are these advantages that we should know and that we get from an international patent filing:

If an inventor or an applicant intends to file a patent in a more than one country then the total cost of the patent filing may go up from upto USD 50,000 or even more. Through direct national phase filing or conventional filing route this investment has to be made in a period of 12 months which becomes a huge burden and hence the inventor or the applicant drops the idea. By adopting PCT (International) patent filing route, this investment is to be made over a period of 30/31 months at a meagre cost USD 600 – USD 2000. Thus, you can plan your investment for filing patent in different countries accordingly.

Since the international patent filing gives a longer time period for a company to file its patent in different countries, the companies can launch their products in different countries and can assess the marketability factor of the patent or product. This reduces a risk rate caused due to unnecessary cost bearing of intellectual property and to justify the investment, the companies try to linger for higher time into the market which shows low response to their patented products. Thus, the international patent filing gives a company a better picture that which countries should be in their priority patent filing list and increase their chances of increasing a return on investment.

Its true that commercialization or licensing of a patent is higher in some countries than others. So, if you have filed an international (PCT) patent then it can help you license a patent in a particular without bearing the cost for filing the patent in that country. You heard right, if your product has really good potential in a market, the interested can act as assignee or applicant and will file the patent in their country with you being inventor. In this way, you can license your patent, file your patent in a country and avoid investing a higher amount for filing a national phase application.

Hence, it is always advised to file a PCT  (International Patent) application, it will never harm you if your research and innovation is actually true to its core and has mass appeal.

Yes, the international patent filing can actively help in enhancing your research and get connected or acquainted to a person research in the same field from different university, state or country. An international patent filing assures a privacy or protection extension to the inventor for larger time period. So, if more than one inventor across the globe are researching in the same field can actually exchange knowledge among themshelves to improve the results of their research drastically and may also improve the turn around time for an outcome. This is possible due to the fact that now the inventors do not need to be afraid of copying because although the international patent filing does not allow protection in a particular country but in case of any mischief it allows sufficient time to the inventor file their inventor in their targeted country and take next course of action.

What Are The Preferred Countries to File International Patent Filing (Conventional Filing)?

Now, let’s talk in detail about another kind of international patent filing i.e. direct conventional entry into foreign countries within time period 12 months. Many inventors and applicants intend to file their application in only one or two foreign countries than their native countries.

United States of America is one of the primary destinations for patent filing of the inventors due to the fact that the patent organization of the USA is highly matured and a procedure goes through a rigorous scrutiny by the USPTO Examiners. Hence, whichever patent comes out unscathed and get grant in USA has high value. Along with value addition, USPTO also provides a high commercialization ration which means if your patent is granted in USA and you intend to license the same then it is much easier in USA than other countries.

European Patent Organization are termed as equally if not better patent office and their patent procedures have similar stringent rules as compared with USPTO. Although, due to higher cost of filing applicants try to avoid EPO filing, but to ensure best commercialibility of their product, EPO is one of the best jurisdictions. Also, in such a huge filing cost, the applicant gets a massive benefit that it can test the largest pool of developed nations as EPO has more than 30 countries signatories to it and most of them are developed nations.

Additionally, a patent granted in EPO is applicable in all its signatory countries and it adds a massive value to the patent valuation and corporate valuation for a company who owns a European patent portfolio.

Hence, if you need to choose a jurisdiction for direct international patent filing, EPO should in your prime list as it can give a market boots that your patent and your product deserves.

Japan is another developed which has rich and diverse patent background and an applicant who has a Japanese granted patent and patented product can achieve maximum marketability of their products. To file a patent in Japan, one needs to translate a patent application into Japanese language. The patent examination in Japan goes through fine scrutiny and if succeeded, can add massive value to a patent portfolio of an applicant.

Japan provide a wide market acceptability due to their history of producing one of the finest patented products in the world and most of those products are second to none. Hence, if you are looking to choose a list of countries in which your patent application should be filed and with that you are looking to ensure high market potential then Japan should surely be in that list.

Although, Australia is not a prime destination for a lot of patent filers but it should steadily the Australian patent ecosystem is emerging to one of the best in the world and also its market is one of the most sophisticated with high inception rate. Australia allows patent filing in English language and allows an inventor to explore various technical fields in terms of innovation. The patent ecosystem in Australia allows patent filing in futuristic projects also, given the fact that they should not be an abstract idea. So, Australia should be given much more weightage in your patent list along with other primary countries.